I’ll begin with a shout out to the twenty or so tech worker activists who protested in front of Congresswoman Zoe Lofgren’s San Jose office on July 11th. They chanted, carried banners, and spoke to the press thus reminding Lofgren, and other elected officials, that voters are not happy with the work they’re doing. Thanks again and nicely done!

Could an Amnesty End Up in the Reconciliation Bill?
Attempts by many Democrats, and some Republicans, to push amnesty legislation through the Senate have been stymied.  Lacking the overwhelming support required to bypass a filibuster, several Democrats are now trying to put amnesty into the upcoming reconciliation bill.

For instance, Congresswoman Pramila Jayapal of Washington wants to include a pathway to citizenship for DACA, Temporary Protected Status recipients (TPS) and “essential workers.” In short, these are amnesties. I don’t have an issue with DACA individuals being granted a pathway to citizenship, in fact, I think some deal can and should be reached. But a pathway for “essential workers” is particularly troubling for tech workers.

Unlike the Trump administration, there’s no infighting in the Biden administration when it comes to immigration policy. Everyone’s on the same page, wanting to grant green cards and pathways to citizenship to as many legal and illegal immigrants, as possible. For tech workers already bracing for increases in the number of paroles and revisions to the visa bulletin, amnesties are an elevated hazard.

If history reminds us of anything, it’s that an amnesty today begets future amnesties, especially when requisite reforms are not in place prior to or in tandem with legislation. In the case of “essential workers,” significant reforms to the H-1B visa program need to happen — an end to the dual intent nature of the visa, prioritization of applications based on salary, and an overall increase in the prevailing wage rate.

Our southern border is in crisis and although this is a self-inflicted wound, it must be dealt with before there is any talk of amnesty.   Raising the prospect of an amnesty drives risky behavior and incentivizes migrants to cross the border illegally in the hopes and off chance that amnesty will be granted in the future.

Instead, a quid pro quo is in order. If DACAs are granted a pathway to citizenship, every employer must be required to enroll in E-Verify and sanctions must do more than impose fines. They must punish employers who skirt immigration laws by sending them to jail.

In addition, we must keep in mind that a restrictive and well-regulated immigration system, one that prioritizes the needs of productive U.S. citizens, is a critical safeguard that will ensure the continued prosperity of our nation.

Meeting of the Subcommittee on Immigration
This week the House Judiciary Subcommittee on Immigration and Citizenship held its hearing “Oh, Canada! How outdated immigration policies push top talent to other countries”. I previously discussed facets of the testimonies submitted in advance, so won’t belabor this further other than to say the lobbyists invited by Representative Lofgren presented the usual claims  —  there’s a labor shortage, H-1B workers are “high” skilled and the best and the brightest, every foreign student who studies here should remain, and we need to simplify the immigration process or risk losing top talent.

Professor Ron Hira of Howard University did a great job of dismantling the myth of a STEM labor shortage and eloquently and effectively outlined how the H-1B visa is being used to displace qualified American workers. It’s rather peculiar that his defense of U.S. tech workers seemed to put him at odds with many Democrats — ostensibly the party of working men and women!

If you missed the hearing, you can watch it in its entirety by clicking here.

EB-5 Lawsuit to Not Count Family Members Towards Visa Caps Loses in Court
We received great news last week when the U.S. Court of Appeals, D.C. Circuit upheld the ruling that spouses and children of those sponsored for EB-5 investor Green Cards, count towards the visa quota. Ira Kurzbaum, a prominent immigration attorney specializing in EB-5 Green Cards, and supported by the Cato Institute, tried to argue spouses and children should be cap exempt.  Had he prevailed, it would have only been a matter of time before his attention would have turned to other employment-based Green Card categories and attempting to argue a similar case.

It is once more into the breach we go as we fight against attempts to use the budget reconciliation bill to enact immigration policy. Done right, immigration policy will require deep and meaningful discussions. It should not be shoved haphazardly into a budget bill.

Please share this newsletter with friends, family and colleagues and make sure to hit the donate button below. Your generous support enables us to fight for our most productive workers. 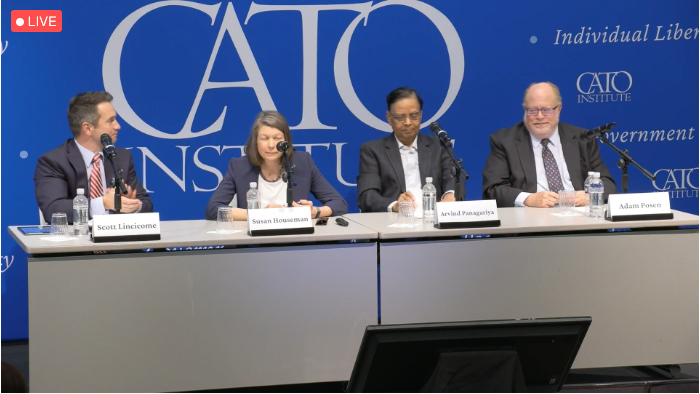